Determining which languages are spoken most in the world is a more difficult task than you might imagine. We can say with some confidence that Mandarin, English, Spanish and Arabic will make an appearance, and roughly in what order. But there are some surprises too. Would you have guessed that Bengali is in the top ten? 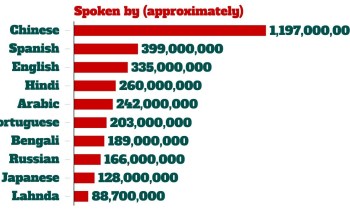 Numbers vary widely — Ethnologue puts the number of native speakers at almost 1.2 billion native speakers, roughly a billion of whom speak Mandarin — but there is no doubt of its clout. If you wish to learn a language that one in six people in the world speak, this is the one for you. A tonal language with pictograms, it will certainly keep you busy.

If we are only to look at native speakers, Spanish has its nose in front of English with about 400 million speakers. If you want a language that will open up whole continents to you, Spanish is your best bet. As with all the languages on this list, the politics of language and associated identity are highly disputed: ask Catalan or Quechua speakers if Spanish is their local tongue and you will get a very different answer. But it is certainly the primary language of most of South and Central America, Spain, and, ahem, large swathes of the US.

If you’re reading this article you may be one of the 360 million-odd native English speakers, or one of the half a billion people who speak it as a second language. This indicates the remarkable success of English as the lingua franca of business, travel and international relations. The relative ease with which English can be picked up (especially compared with Chinese) and the pervasive soft power of US culture mean that English will continue to dominate the world stage. For some, English is still synonymous with opportunity and a better quality of life.

India has 23 official languages, with Hindi/Urdu chief among them. Whether this is one language, Hindustani, or two dialects, is still fiercely contested. Spoken mainly in northern India and parts of Pakistan, Hindi uses devnagri script while Urdu uses Persian notation. At the time of writing, the debate about its role in Indian education and society has once again flared up: Prime Minister Narendra Modi, a Hindu nationalist, is seeking to have Hindi displace English in the southern Indian states as the primary language of official communication and education, a strategy that has met with resistance. If you ever travel in the Indian subcontinent, a little Hindi will get you a long way. Plus, this is the language that gave us shampoo, jungle, jodhpurs and bungalow — what’s not to love?

Recent numbers put Arabic at around 250 million native speakers. But this is another instance of numbers not telling the full tale: Arabic, like Chinese, is so vastly different in its respective dialects as to be effectively a number of languages, grouped as one for the sake of convenience. Modern Standard Arabic is a primarily written form, closely related to the Classical Arabic of the Quran. However, the spoken forms of Arabic in, say, Oman and Morocco are so different that a couple of philosophy professors from these countries might be able to discuss the finer points of the ancient texts while struggling to order lunch.

This is another language whose reach owes much to its colonial past. Starting in the 15th century, avid Portuguese traders and conquerors brought their language to Africa, Asia and the Americas. The spread of Portuguese may have initially been tied to European colonization, but the colonized countries developed their own vibrant cultures that transformed the language forever. Today, Portuguese is spoken by 215 million native speakers in countries like Brazil, Goa, Angola, Mozambique, Cape Verde, Guinea-Bisseau, São Tomé and Príncipe, and Macau. It’s also the language of Machado de Assis, Bossa Nova, Mia Couto, Fernando Pessoa, and Agualusa.

Admit it: you didn’t expect Bengali to be on this list. The Partition of Bengal by the British in 1947 divided (mainly Hindu) West Bengal, now part of India, from its (mainly Muslim) counterpart East Bengal, now Bangladesh. It is the language of Kolkata, of the Andaman Islands, of fabulous sweets, and of 170-odd million Bangladeshis, many of whom are extremely vulnerable to climate change; by the next century, the population is projected to double while 15% of the land area is expected to disappear below rising seas.

With roughly 170 million native speakers as of 2010, Russian is the eighth most spoken language in the world. Famed for its inscrutable grammar and quite lovely Cyrillic script, it remains one of the six languages spoken in the UN, and produced the likes of Dostoyevsky, Nabokov, Chekhov, Goyal, Tolstoy and Pushkin.

Almost all of the 130 million native Japanese speakers live in Japan — certainly the most highly geographically concentrated of all the languages on this list. Japanese boasts two distinct writing systems, hirogana and katakana, as well making extensive use of Chinese Kanji characters. The largest groups living outside Japan can be found in the US, the Philippines, and Brazil.

With varying estimates of around 100 million native speakers, last spot on the list goes to… Punjabi! (Sorry, German — you got dumped a few years back.) Spoken in large tracts of India and Pakistan, the Punjab was sliced in two by the British when they left, and millions of people were forced to abandon their homes, businesses and families. But they’re slowly taking their revenge, Bollywood-style: Punjabi songs now account for 50% of chart-toppers.