After her kids were reportedly “rude to the bus driver,” a Canadian mother made her two sons walk to school carrying signs that read “Being bad and rude to our bus driver! Moms makin us walk.”

According to cbc.ca, in a Facebook post published Tuesday, the mother wrote she took action after getting a call from her sons’ school about their behavior towards the bus driver.

“That drew the line for me! This morning we did a 7 km walk to show them what every day will be like for them when they get kicked off the bus!” she wrote. “2 hours later they made it!”

To protect the identities of the children, CBC News is not naming the mother and is blurring out the faces of her kids. 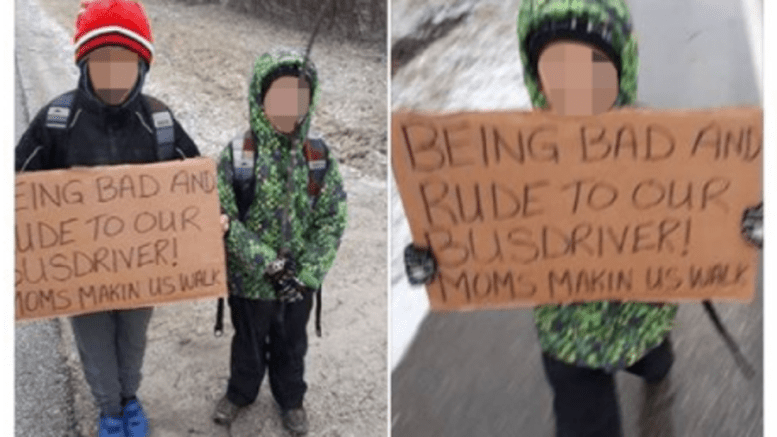 The mother’s post had been shared more than 38,000 times by 5:30 p.m. ET on Thursday, and had received more than 28,000 “likes”, reactions, and dozens of comments, most of which seem to celebrate the actions of a “real parent.”

The mother told CBC the older boy learned his lesson quickly but said her younger son needed to walk a second day to school. CBC says she did not post that punishment to social media.

The mom says she did receive backlash and threats after posting the pictures, so she made a preemptive call to the Children’s Aid Society (CAS) herself to explain her side of the story.