The first lady’s closest confidante is only a New York minute away, and it’s the older sister nobody knows.

Ines Knauss, 48, lives in a $2 million, one-bedroom apartment in a posh Park Avenue building owned by the Trump ­Organization, according to public records. 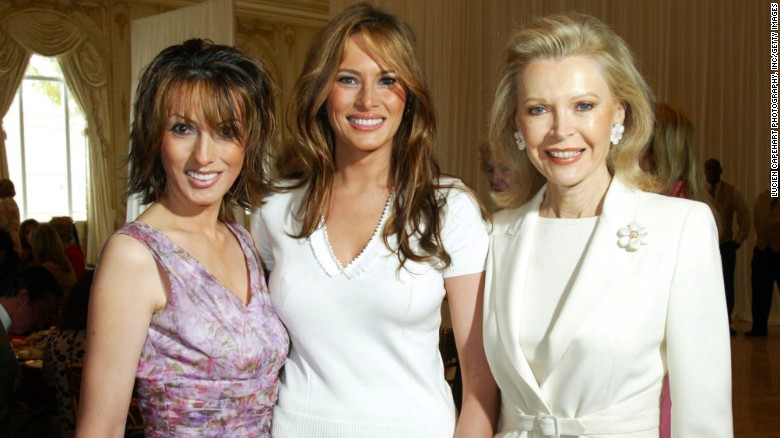 An artist, she’s devoted to Melania Trump and for years has been her best pal, friends told The Post.

“They are very close,” said Palm Beach philanthropist Audrey Gruss, who met Ines at a fundraiser for the Boys’ Club of New York at the Trumps’ Mar-a-Lago ­estate in 2005. “She struck me as a lovely person, and extremely creative.”

And, as the president spends most of his time in Washington and Melania finds herself alone and thrust into an unfamiliar public role, she may be increasingly relying on her beloved sister, who lives only two blocks away.

Despite being an in-law of perhaps the most famous man in America, Knauss, a brunette beauty, has received scant attention — with only a single photograph of her appearing in Palm Beach’s society pages. Press reports on the elaborate 2005 nuptials of Melania and The Donald at Mar-a-Lago make fleeting mentions of Ines’ role as maid of honor.

Knauss seems to live under the radar, and only her Facebook page offers clues to her personality, and glimpses — such as the photo of her in a white, strapless gown — of her private life.

Her posts are filled with whimsical sketches, and the page is a virtual shrine to the accomplishments of her younger sister.

One photo depicts Melania as a toddler, posed in front of a birthday cake with a single candle. Another shows the girls’ mother, Amalija Knavs, holding Melania as a 2-year-old. There is also a striking photo of the now-first lady from her days as a model in Italy.

Both Ines and Melania left Slovenia to start careers in Milan in the early 1990s, said a photographer who knew the sisters. While Melania worked as a fashion model, Ines tried to break into fashion design, according to Ale de Basseville, a Paris-based photographer who took nude pictures of Melania for a French men’s magazine when she was living in New York in the mid-1990s.

She really wanted to be in fashion but didn’t know how to break in,” the lensman said.

“Ines wasn’t like the other girls you would meet there, who behave like queens,” de Basseville told The Post. “She was really polite and very mellow.”

But Ines can also be fiercely protective of her younger sister, dismissing as empty rumors information from former boyfriends and others who sought to profit from tell-all stories in Slovenia during the presidential campaign last year.

Last June, after alleged former boyfriends began giving interviews about Melania in the ­Slovenian-language press, Ines noted in a Facebook posting, “We all have good memories & lies are not good karma.”

“Ines is a very dedicated sister,” said Milan-based fashion designer Luisa Beccaria, who met her on a few occasions in both Palm Beach and New York. Ines included on her Facebook page a glamorous photo of herself with Beccaria at the Trumps’ wedding.

When Beccaria visited the Trumps in New York after the birth of their son, Barron, in 2006, she marveled at the strong family support network.

“I realized that Melania was very close to her family when I saw them all there supporting her after Barron’s birth,” Becarria told The Post. “Melania had all the professional help she needed at that point, but it was her sister she trusted.”