More than 20 years after Donald Trump commissioned what would have been the world’s largest superyacht,OLIVER YACHT DESIGN has opened up about the Trump Princess II project.

It was at the 1993 Florida Boat Show that Trump discovered the Spanish studio, before commissioning a design for what would be, in his words, “not only the largest yacht in the world, but at the same time, the most beautiful”.

Measuring 128.02 metres, this four-deck design was intended to be the successor to the businessman’s 85.9 metre BENETTI  Trump Princess (now Kingdom 5KR), which he sold in 1991.

As these drawings show, Trump Princess II would have boasted some spectacular features, including glass partitions between the main-deck saloons and dining areas.

Meanwhile, the owner’s suite would have sprawled over two decks, with a cocktail bar and a superyacht spa pool within easy reach of the main cabin. Out on the main deck, Trump Princess II sports plenty of space for relaxing in the sun, as well as an upper-deck superyacht helipad.

Take a closer look at the designs for Trump Princess II

Iñigo Oliver, sales manager at Oliver Yacht Design, was just 25 years old when he was appointed to handle nearly all of the direct dealings with Trump, who was then one of the world’s richest men. Oliver and Trump struck up a close relationship, with the Spanish designer being invited to dine at Trump’s Palm Beach mansion and even attending the baptism of his daughter Tiffany.

Company founder Jaime Oliver completed the blueprints for Trump Princess II, but was informed in early 1994 that the project had been cancelled. 23 years later, these archive drawings give us a fascinating insight into what might have been. 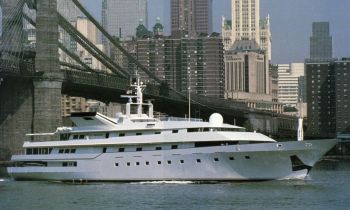 Jaime Oliver with Donald Trump in 1993